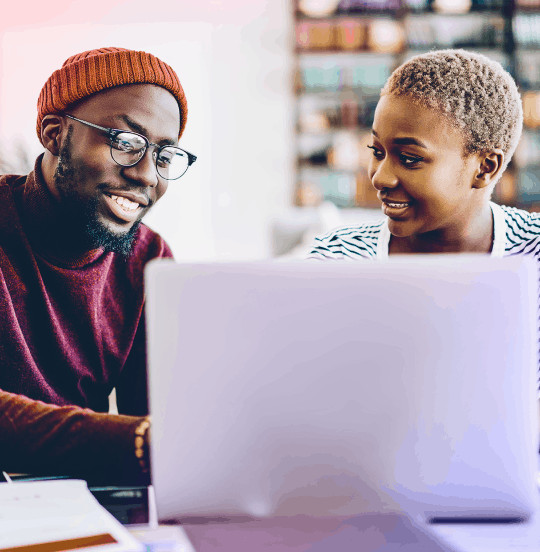 Structural racism permeates every aspect of life for Black Americans. Tech, one of the fastest-growing industries, is the biggest teller of the inequities that exist for aspiring Black engineers. In fact, a report by the EEOC (2016) found that technology firms hire fewer underrepresented minorities compared to all industries nationwide.

What’s especially daunting is the realization that tech is one of the largest wealth creating industries right now. Meanwhile, the Wall Street Journal reports that the median net worth for Black households with college graduates in their 30s has fallen to $8,200 from about $50,400 three decades ago. Over the same period, their white peers saw their median net worth grow 17% to $138,000.

Even moreso, tech influences the ways in which we all live. But what happens when those who create the products we all use do not represent our society? How ethical is it that more than 50% of employees at the world's largest tech companies Apple and Google are white? Is there just not enough Black talent to fulfill these roles? Let’s explore some of these ideas below.

Is it a pipeline issue?

The short answer? No. The issue isn’t the lack of Black talent in the tech industry. In fact, HBCUs produce 25% of all STEM graduates and Black people are pursuing tech now more than ever. However, for many aspiring Black engineers, there are access gaps that prevent them from entering the tech industry, including limited access to technology and interview preparation.

It especially rings true when taking into consideration that Black students are less likely than White students (47 percent vs. 58 percent, respectively) to have classes dedicated to computer science.

The Interview Access Gap for Black Engineers by Karat and Howard University reports that respondents who have had software engineering internships had access to their first PC nearly a full year earlier and got their first exposure to computer science education an average of 2.5 years earlier than respondents who have not had an internship. While it’s really easy to blame an applicant for not passing a code test or bombing a loop interview-it’s actually more productive and fair to reflect on how your strategies may be failing these groups.

There are many different paths to becoming an engineer. When solely focusing on indicators such as institutions a potential candidate may have attended- its indirectly leaving out all sorts of folks. Instead, give an opportunity for career switchers or those who may have attended code bootcamps a shot at proving themselves. Brilliant Black Minds—a program dedicated to unlocking opportunities for Black engineers, works with industry partners like Jopwell to give technical interview practice to engineers who may come from all walks of life. Some candidates may be those who boot camps or are self-taught while others are career changers. In fact, 69% of those who participated in the Brilliant Black Minds from Jopwell were from code bootcamps.

One candidate from the program says:

“Brilliant Black Minds has had a tremendous impact on my confidence and experience. It’s a community of developers with various skill levels coming together to learn from one another and share their experiences. This has been a priceless program and the icing on the cake for me post-code bootcamp.”

Those who have non-traditional backgrounds may not come from all the same institutions as your current employees- however, that shouldn’t rule them out as highly qualified candidates. Instead, talent acquisition managers and recruiters should begin rethinking hiring practices that are gatekeeping Black candidates from successfully entering and succeeding tech. Inclusive hiring methods also help underrepresented groups regardless of age or gender and level the playing field for all.

The work Jopwell and Brilliant Black Minds are piloting is advancing the field of talent development, evaluation, and hiring through the lens of diversity and inclusion. The process recognizes significant inconsistencies in the traditional technical assessment process and aims to show that abilities such as problem solving, grit, and curiosity can be measured, providing a more holistic perspective and more effective outcomes. We believe that recognizing differences in knowledge sharing, test prep, and evaluation design can significantly impact the yield of hiring processes to build better teams for all.

Evolving the way we recruit and evaluate candidates

For an engineer, time is of the essence. If every candidate who applied for a job went through multiple hours of interviews with multiple engineers, it would be impossible to keep up with deadlines, projects, and business goals. Therefore, it may be easy to use a one size fits all method for all of your candidates including resume screens, code tests, etc. However, inclusive hiring and interviewing requires recognizing the differences in learning and test taking for each candidate.

Having a transparent hiring process where each candidate is aware of the steps helps relieve candidate anxiety. The same report showed that interview anxiety is a barrier to entry for many underrepresented groups. In fact, 19% of all respondents said they were unlikely or very unlikely to succeed in a technical interview, nearly double the percentage of respondents (10%) who say they are unlikely or very unlikely to succeed in a tech job. This can be tied to many factors such as not having the luxury to fail, or not knowing what to expect during the interview process.

Democratize the interview process and make it clear how to prepare for an interview. This can be as easy as creating a section on your website with a document of what to expect during the interview process, how to prep for the initial onscreen all the way through the final loop. For most underrepresented candidates- it may be their first time doing a technical interview and they may not have access to a network or resources to prepare properly. Even moreso, non-traditional candidates may be unfamiliar with the specifics and expectations of a code test. They may need more opportunities to ask clarifying questions and get guidance from the interviewer. Create a human-centered interview with a live interviewer, who can help answer these questions without giving away the answer.

Everyone deserves a seat at the table. Especially those who have been excluded from tech for so long. Implementing these tactics is one way to increase diverse representation at your company and leads to creating an equitable tech industry- one that truly represents our society.