LinkedIn Develops a Solution for Mispronouncing Names in the Professional World 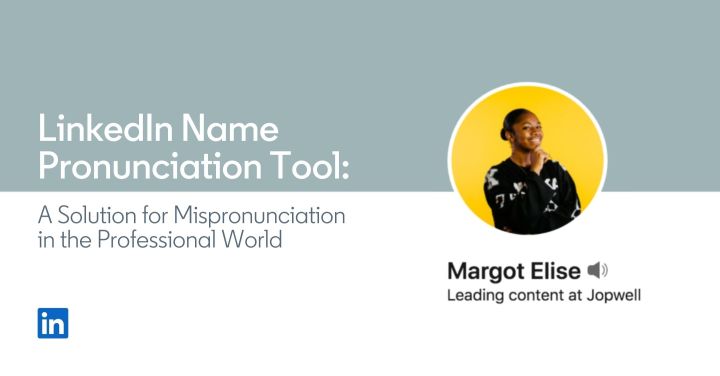 When I was in grade school, I often experienced having to correct people when pronouncing my name. Some days, I wouldn't even correct people because I was embarrassed or uncomfortable with not having what I thought would be deemed a “normal” name. “Margaret” was the most common mispronunciation and for a long time, my identity was “Margaret.” It took years for me to finally gain the confidence to speak up for myself and tell people that my name was not phonetic—it wasn’t misspelled either. As I continue to navigate in spaces where people come from diverse backgrounds and cultures, I’ve learned two things—that I am not alone and that it is okay to correct people when they are wrong, especially about the way they pronounce your name. As a person who identifies as an introvert and who doesn’t always want to speak up and correct people when they mispronounce my name, it is comforting to see that LinkedIn has developed a feature that will help solve this problem.

LinkedIn developed its first pronunciation tool that allows users to share how their name is pronounced on their profile. Led by former LinkedIn Product Manager, Joseph Akoni, this simple feature enables profile viewers to click on the speaker icon next to their name and listen to the correct pronunciation.

Although these numbers vary, it’s important to acknowledge the impact of name flubbing. It may seem like a harmless mistake, but name mispronunciation has been considered to be one of the most subtle microaggressions that often get overlooked. Having one’s name pronounced correctly is important for some people as names can be representative of one’s culture, heritage, and identity.

The growing economic and emotional fallout of the pandemic hasn’t made this challenge any easier. Because we’ve experienced less human interaction, it’s easy for us to not engage as much with colleagues, which has potentially contributed to unfamiliarity. Some employees have never met or interacted with people outside of their immediate departments. The problem is not only internal, 10% of respondents from former surveys admitted to botching a big sales opportunity when they mispronounced a prospect's name. When it comes to fixing naming and identity problems at work, 28% of professionals said that they would like more user-friendly pronunciation tools integrated into workplace programs like Zoom, Slack, select social media, etc. The update to LinkedIn’s interface gives people the option to upload up to 10 seconds of audio to pronounce their name. This feature currently can only be added via the mobile app, but it has been proven to be extremely useful to LinkedIn users.

Project Lead, Joseph Akoni worked on the feature after just two months of being with the company, and as he has recently transitioned to a new role at Google, he continues to reflect on the impact that his product has had on the company and the LinkedIn community.

Jopwell: What was the inspiration behind this product?

Joseph: LinkedIn [the world’s largest professional network, built to create economic opportunity for every member of the global workforce] is a global product whose member base is made up of a majority of international members (outside of the US). Given that the goal of the product is to connect people to opportunities and a majority of the member base is non-US, then we would have to ensure we could increase the efficiency of member-to-member communication. Communication always usually starts with an introduction of your name so we wanted to make sure we could help members kickoff every communication in the best way. Members were requesting the product and we knew we had to build it.

Jopwell: What are you most proud of about this product/project?

Joseph: The pride that its use has given people to not have to Americanize their names and to bring their full authentic selves to the LinkedIn platform (and hopefully to their physical workplaces as well). I have received so many notes from people who appreciate how this has made them more confident in correcting people whenever someone mispronounces their names.

Jopwell: Why is this feature important to you?

Joseph: This feature is important to me because it shows that a major tech company is normalizing bringing your authentic self to work. When people feel more comfortable at work this could lead to them being happier and perhaps more productive. It is a small step in ensuring that people can feel comfortable being who they are in the workplace but it is a step in the right direction.

Check out how this tool has already brought positive change to the LinkedIn community.